WHAT IS CHOREOGRAPHY PART 4

Choreography is hanging around in space and being somewhat conscious of it. Time just does its thing.

What is choreography?
Movement in space
Movement of all kinds of things
Of all things which are in the room, bigger things like table and chairs, smaller things like paper and vitamin pills.
Movement in the body of arms, legs, head and organs.
Choreography is the staging of all those movement sequences in space.
It is made for observation.
What happens to one's thoughts while watching is part of the experience.
A movement sequence is determined by certain parameters.
E.g., agreements and rules can be parameters.
For a choreography which develops further there hardly are any tools on which one can rely, but that's exactly what's interesting about it.
Time plays an important role.
Mostly, there is a beginning and an end.
The borders may dissolve;
between commonplace and virtuoso, between on stage and not on stage, between the working process and the presentation, between beginning and end.
Choreography is like setting out on a journey.
To a place one doesn't know, where one doesn't really know where it is. That one will get lost is quite certain. Perhaps one will never get where one wanted to go in the first place. Perhaps one will find something interesting on the way.

Also, why and through what is choreography created? (As practice, or with the observer.) Permeation of materials. Those materials can be: Body, feeling, language, text, concept, thought, sound, image/film, situation. Permeation means investigating oscillation, dynamics, relations of tension. Let those widen, spread out in space and time. Translate them into rhythms and intensities. Let those overlap or collide. Intervals come up, transgressions, re-establishments. Every material, every medium has the potential to dance. There are many possibilities of sorting dispersing sense stimuli, or to have them sorted. I desire something different from choreography than an intellectual synthesis of recognition and presentation. It transcends that. And when it does so, it connects with the world.

Choreography as Operationalisation of Body Movement
in Dance/Theatre Research.

The term ‘Choreographie' derives from ‘choros' = place of a round dance, dance place, dance group, and ‘graphein' = writing. In France, the term is first used near the end of the 16th century (Arbeau, Thoinot. Orchésographie. Langres, 1588) meaning the notation of dance steps and patterns by means of conventionalised word abbreviations. In the course of the 18th century, the term's meaning changes; it now stands for the invention and composition of steps and patterns (whose notation is still possible, but not imperative); cf. e.g., Grand Larousse de la langue francaise. Tom.I. Paris, 1971; Etymologisches Wörterbuch des Deutschen. Bd.I. Berlin, 1989.

In my opinion, it would be a necessary and rewarding undertaking of dance research to investigate more closely the structural relationship between ‘writing' and ‘inventing' body movements in space, as manifested in the history of the term ‘Choreography': Such an analysis would counteract the externalised usage which first of all understands choreography topographically – as ‘the technique of distributing and arranging individuals in space' (cf. e.g., Hravtin, Emil. "Die Topographie des Balletts". Wesemann, Arnd (ed). Jan Fabre. Frankfurt am Main: Fischer Taschenbuch Verlag, 1994, 95-104, here: 95) -, a usage which probably has developed because movement documentations and/or inventions among other things become visible as spatial patterns. This understanding of choreography does not put enough stress on the strategy of moving (and its dynamic relationship with writing, as documentation or discourse) which always has been necessary in order to produce topographically perceptible results.

Choreography functions as a non-verbal model for comparison and even contrast with other theatrical construction types like, e.g., dramaturgy as well as it can be defined along its connections (which yet have to be determined more exactly) with other historical and discursive strategies (e.g., performance, gender role, formation of motoric identity). Its systematic discussion now seems to me to be an important desideratum of a kinetically orientated dance/theatre research because it reflects the medium of movement.

I would like briefly to delineate possible historical and structural markings with regard to term and usage of choreography with four examples from dance history (dance in the 18th and 19th century, beginning and end of the 20th century). Contrary to the usual approaches to understanding choreography which dwell on its formally structuring qualities or its usage as a metaphor referring to dance in general, these four sketches read choreography as a complex, sharply discerning medium – as an operation, a procedure which can be determined methodically stringent and effective with regard to cognition by way of its different, conceptual as well as materialised – treatment of movement in the reference system of knowledge, writing, and inventing.

The choreographic procedure practised in the baroque era is defined by the meaning of the composition or re-composition of steps and gestures used like props – as a normative analogy of remembering on the one hand, and writing and performing on the other hand. Thus, body movements in space organise according to a tablature (here: the absolutistic one) until body and movement become aware of their inherent capacity.

The 19th century among other things exemplifies a choreographic procedure in which notation and performance show a relation to remembering less explicit than to the idealised transformation of whole-body movement. The balance, harmony as space-conscious embodiment is corporeal and choreographic technique at the same time, implicating the potential for dynamisation of the precarious stability, for productive destabilisation.

This tendency becomes concrete, e.g., when the transformation of existing material – like, e.g., since the beginning of the 20th century – for the invention of new movements individualises and thus makes new ways of putting it into writing necessary.

One has to observe that in all the models and phases of history here delineated, the understanding of choreography synthesises the reference system knowledge, writing, and invention of body movement within cultural contexts. Currently the deconstruction of this up to now valid synthetic structure takes place by organising it as a combinative game, i.e., it isolates the single factors and detaches them from the traditional commitment to the reference system. According to this perception, which in contemporary theatre practice and probably quite commonly is called post-structuralist, the term of choreography is implicit in the discursivation of movement if one reads movement itself as radicalised choreographic procedure. The discursivation of movement therefore mirrors a possible tactics of ongoing choreography as much as it commands retrospective and current theoretical cognitive potential, which is relevant with regard to the discussion not only of choreography, but of all theatrical strategies dealing with non-verbal means of presentation.

Dear David,
hope you are fine wherever you are at this moment.
It has been a while since we saw each other last time. And as always, every time we meet, we are so busy that we don't really have time to talk. I am writing to you for no special reason:
I just want to tell you that it would be nice if we could go and dance together next time you and me get together. It would be also nice if we could realize the weekend drive we've been talking about in the Austrian countryside this autumn. Oleg is very much looking forward to joining us. That will be a very nice reunion of us three.
Michikazu
p.s. I attach a picture of Jennifer. We usually take a walk in the morning to the beach. 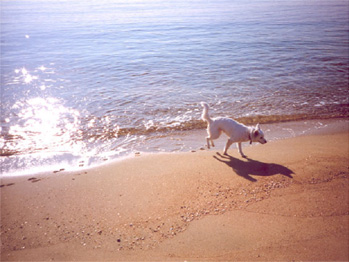 Hey Michi,
so good to hear from you. Really. Specially cause of no special reason.
Hope you're fine and your lovely ones too.
By the way, shit about the key. I'm really sorry.
Everything was a bit too tight.
Yes, Oleg's weekend should be done. Definitely.
No picture to send these days.
Best wishes,
David

Considering the various and numerous definitions of choreography, I intentionally keep mine very simple and rather "classical": For me, choreography means a reflected order of movement in space and time.

But – and it is this which makes our discipline so intriguing – movement in this formula stands as a pulsating placeholder for many things: Thinking, energy, gesture, rhythm – just to name a few. With this, the field of possibilities consciously and consequentially is expanded into infinity. And that's very good for the future of our field …